Highly accomplished educator, adjudicator, and director Gregg Norris leads the Sidney High School Band & Jazz Ensemble. Gregg earned his Bachelor of Science Degree in Music Education from Hartwick College (Oneonta, NY, 1984)  and his Master’s Degree in Social Sciences from Binghamton University (1991).  He has been the senior high school band director in the Sidney Central School District since 1985. Responsibilities include directing the senior high concert band, stage band, jazz combo, and marching band, plus teaching classes in music theory and music appreciation. You can find out more about Gregg here.

Very early on a cold Tuesday morning in February, the Sidney High School Band & Jazz Ensemble met for its drive to Albany International Airport. On arrival, it was greeted warmly by its Music Travel Consultants tour director, Tom Young, who assisted the group with boarding passes, instrument and luggage check-in and directions to TSA Security and the departure gate.  Next stop?  Orlando!

Arriving at sunny Orlando International Airport, the Sidney group boarded Disney’s Magical Express for the ride to Walt Disney World in Lake Buena Vista, Florida.  Destination?  Disney’s Pop Century Resort, where the group’s lunch awaited!  After eating, it was time to go directly to Disney’s Epcot theme park.  With a winning combination of technology and science in Future World, and the history, culture, traditions, and cuisine of eleven countries in World Showcase, Epcot offers something for everyone.  At its core, Epcot is all about education, delivered in person or via electronics, and so smoothly that one doesn’t notice he or she is being ‘schooled.’

After an afternoon enjoying Epcot favorites like Test Track®, Innoventions, and Frozen Ever After, the Sidney High School students were treated to the best seats on the World Showcase lagoon for a private IllumiNations Dinner! The group witnessed a thrilling nighttime kaleidoscope as the sky erupted with over 1,100 pyrotechnic bursts.  Meanwhile, the extraordinary Earth Globe floated across the lagoon, revealing wonders of the seven continents on its curved LED screens — the first of their kind. Everyone reveled in the rousing original music, as lasers painted the very sky into a work of art.  At day’s end, the Sidney group was ready for a good night’s sleep at Disney’s Pop Century Classic Years Resort. Its adventure had just begun!

Wednesday dawned brightly and offered a quick breakfast at the Pop Century.  Then it was off to Disney’s Magic Kingdom, where timeless stories come to life in seven whimsical lands of fun and adventure. Students found they could plunge down a breathtaking waterfall on Splash Mountain, share the patriotic spirit at The Hall of Presidents and zoom past planets at Space Mountain. By captivating one’s imagination, Disney’s Magic Kingdom park makes the world of make-believe come alive and brings out the child in everybody!

Following serious morning fun, and some lunch, the Sidney group rode the Magic Kingdom ferry boat across Seven Seas Lagoon, and returned to the Pop Century resort to pick up instruments.  It was time to get prepped for Disney’s “You’re Instrumental” Workshop.

Disney’s “You’re Instrumental” Workshop gives the students a chance to perform Disney music with a seasoned Disney clinician. Disney Youth Programs describes the program as follows: “Sight-read, prepare and record a polished performance of special Disney music selections in a studio environment like a professional musician.”

Once the workshop finished, it was time for more Disney fun! Returning to the Magic Kingdom after storing instruments at the hotel, it was time for dinner, more fun and Disney’s newest evening show, “Happily Ever After!” Combining magical Disney storytelling, beloved Disney characters and the best fireworks ever, this innovative, inspiring show plays most evenings around Cinderella Castle in Disney’s Magic Kingdom. Sidney High School students really enjoyed this showcase of the greatest adventures Disney characters have taken to achieve their dreams. The show features the latest pyrotechnics, original animation, and a heart-tugging, original score. And, thanks to the inclusion of state-of-the-art projection mapping technology, more Disney characters than ever before appear in this show: “Aladdin,” “Big Hero Six,” “Brave,” ” Frozen,” “The Lion King,” “The Little Mermaid,” “Moana,” “Tarzan,” “Toy Story,” “WALL-E,” “Zootopia” and others! Afterward, it was back to the resort for some much-needed rest.

Thursday morning after breakfast, the Sidney High School Band & Jazz Ensemble, instruments in-hand, boarded its motor coach for the ride to the big new stage at Disney Springs. The Sidney Concert Band gave a magnificent concert in this open-air venue along the picturesque Lake Buena Vista. When the concert band finished, the students grabbed a quick lunch before the Sidney Jazz Ensemble took the stage for its time to shine! The Jazz Ensemble gave an equally memorable performance on the Disney Springs stage for the enthusiastic crowd.

By now it was mid-afternoon, and the students set their sights on Disney’s Hollywood Studios! After some great rides like Rock ‘n’ Roller Coaster Starring Aerosmith and Twilight Zone Tower of Terror™, and a stop for dinner in the park, the group attended an electrifying presentation of Fantasmic. This evening show at Disney’s Hollywood Studios allows guests to experience the fun, fancy, and fears of everybody’s favorite heroic mouse, as he battles the forces that turn his vibrant dreams into a vivid nightmare. Mickey faces off against Disney villains in a lavish spectacle of dancing water, dramatic music, breathtaking animation, lasers, fireworks, and surprises!

Following on Fantasmic’s heels, it was off to a galaxy far, far away and the Star Wars Galactic Spectacular! This new evening sensation lights up the night with dazzling colors and exploding Starships, putting guests into the center of memorable Star Wars moments. Whether gazing at Tatooine’s famous twin suns, battling an army of Trade Federation droids, navigating through a swirling asteroid field or rocketing down the Death Star’s narrow trench for a knockout blow to Starkiller Base, this show is dynamic! Creative lighting, lasers, state-of-the-art projection effects, and pyrotechnics create an unparalleled experience for Disney guests, Jedis, Jawas, Wookiees, droids, and Ewoks!

Breakfast on Friday morning found Sidney students devouring Rainforest Cafe’s famous Tonga Toast!  After this delicious start, everyone was ready to take in all Disney’s Animal Kingdom has to offer. Here, the group took close-up photos of free-roaming creatures of the African Savannah on Kilimanjaro Safaris®, were whisked back 65 million years to rescue the last dinosaur on DINOSAUR and traversed the mysterious and forbidding Nepalese Himalayas aboard Disney’s longest rollercoaster on Expedition Everest, meeting tigers, giant bats, and other exotic animals along the way.

Up next, the World of Avatar. Floating mountains, the mystic river of a Na’vi shaman and mountain banshees were just a few of the wonders. By day, Pandora is just waiting to be explored, a wonderland of extraordinary landscapes, streams, and waterfalls, with numerous interactive Pandoran flora.  It also features an incredible virtual reality ride, Avatar: Flight of Passage, one that VR fans should not miss.

After lunch that day, it was time to return to New York State. The Sidney High School Band & Jazz Ensemble, Gregg Norris, and the friends and family that helped make this trip the success it was, did so with class and great energy. MTC hopes this trip provided the students with great memories and experiences that they will remember fondly for years to come!

“The entire Music Travel Consultants Team is to be commended for an absolutely wonderful experience for my students. From our initial parent meeting to the last handshake after boarding the bus to go home, Music Travel Consultants worked hard to make our students’ experience the best it could be. MTC’s easy accessibility proved to be invaluable, and throughout the planning process MTC provided guidance, offered helpful suggestions, and made the daunting task of putting a trip like this together much less intimidating. I would recommend Music Travel Consultants to anyone interested in traveling with their school music groups, and I wish them nothing but continued success in the future!”

Is your performance group ready for the challenge of DisneyWorld? Contact Music Travel today, and learn more at www.musictravel.com. 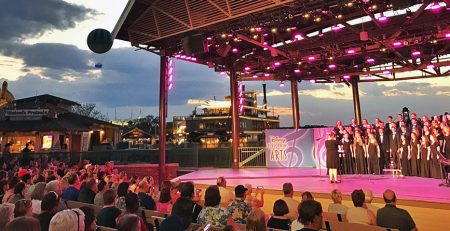