The Franklin Music Department, hailing from Franklin, Indiana, loves to travel and perform.  After its second trip to New York City with Music Travel Consultants,  which featured the Choir at Carnegie Hall, a clinic with Dr. Rollo Dilworth, and an earlier performance by the Blue Regiment Marching Band on the deck of the U.S.S. Intrepid, the staff called on Music Travel to design a trip south that would feature awesome shows, great meals, spectacular sights and shopping, just like they had enjoyed in the Big Apple.  The charge was crystal-clear:  it was time to visit this month’s featured destination, Walt Disney World, for a never-to-be-forgotten marching band experience, Disney style!

Director of Bands Tim Kosch decided his band was ready. Indiana winters aren’t very accommodating to marching bands,  but the director and staff were confident the Blue Regiment would meet the challenge and become one with the spirit of Disney in the Magic Kingdom Theme Park’s new Festival of Fantasy Parade! A daily Magic Kingdom event, it brings the characters and stories of New Fantasyland to life! New floats and costumes showcase characters from Frozen, Beauty and the Beast, Cinderella, Dumbo, Pinocchio, The Little Mermaid, Peter Pan, Sleeping Beauty, Tangled, Fantasia, Snow White and so much more!  The band, the staff and the parents couldn’t wait!

Music Travel Consultants met Tim Kosch and the Blue Regiment at school for the overnight motor coach ride to Florida. The excitement level spiked off the charts as the group neared the gates of  Walt Disney World®, the ultimate student travel destination, where dreams come true and fantasies become reality. Unlike any other place on earth, Walt Disney World® Resort in Florida provides a magical experience for students of all ages. Theme Parks with outstanding recreational opportunities, unparalleled educational adventures, unforgettable performance opportunities,  incomparable resort hotels, fabulous dining and unique shopping are all contained in a place where everyone may join Disney friends for the trip of a lifetime.

Jumping off the coach and into the fun on Day Two, the band first visited Disney’s Animal Kingdom®.  Whether riding an open-air vehicle, surrounded by free-roaming beasts of the African Savannah on Kilimanjaro Safaris®, or whisking back 65 million years to rescue the last dinosaur on DINOSAUR, students and adults loved it. A highlight was traversing the mysterious and forbidden Nepalese Himalayas aboard Disney’s longest roller coaster, on Expedition Everest®. They met tigers, giant bats and other exotic animals up-close, enjoyed spectacular live stage shows, and experienced the thrill of a (soaking) whitewater expedition on Kali River Rapids® — all in the same day! The band barely took time to use Disney Meal Cards for lunch!  (Note:  Franklin Community missed the opening of “Pandora:  The World of Avatar” at Disney’s Animal Kingdom® by just a month – – a good reason to return in several years!).  That evening, the group checked into the Delta Orlando Lake Buena Vista Hotel, a Disney Good Neighbor Hotel, and the closest off-site property to Walt Disney World.  After filling up on tasty Cici’s Pizza, they called it a night.

Day Three began with a delicious breakfast buffet at the hotel. Loading its coach with instruments and marching attire, the band set off for the Magic Kingdom®, where timeless stories come to life in seven whimsical lands, full of fun and adventure. No matter if you were plunging down a breathtaking (soaking) waterfall on Splash Mountain®, rocketing through the galaxy inside Space Mountain® or feeling the energy and excitement of a thrilling Disney parade, you knew without a doubt you were in a special, magical place! By captivating the imagination, the Magic Kingdom makes the world of make-believe come alive, to bring out the child in everybody. Giving the group the most flexibility to enjoy its day, the band had lunch in the park with a Disney meal card provided by Music Travel Consultants.

At one o’clock in the afternoon, the band met its Disney Representative. Disney Performing Arts On Stage offers music and dance groups the chance to perform live for the world at the Walt Disney World® Resort. Franklin Community Blue Regiment Marching Band readied for its “performance of a lifetime”.  Everyone wanted to make sure that this magical moment would go smoothly and be treasured forever.  At two thirty, the Festival of Fantasy Pre-Parade began with a flourish.  And who was leading the parade?  The Franklin Community Blue Regiment Marching Band!

After a stellar performance, the band enjoyed more time in the park, plus dinner, paid for with a Disney meal voucher. At nine o’clock at night, all looked skyward to make a wish upon a star and marvel at a musical firework spectacular that is uniquely Disney.  The mind-blowing creativity of the Disney Imagineers is nowhere better displayed than by the stories and Disney characters that complement the array of never-before-seen fireworks and pyrotechnic effects created specifically for the amazing show. Afterwards, it was back to the hotel for some well-deserved shut-eye.

The next day, the group ate breakfast at the resort and then departed for Epcot. Made up of two distinct sections, Future World: A Vision for Tomorrow (showcasing the newest technological advances in Innoventions, and a super automobile experience called, Test Track) and World Showcase (featuring eleven countries of the world and each’s culture, traditions, art, history, and cuisine), Epcot entertains, feeds and pleasantly educates its visitors. Disney Dining cards provided lunch and dinner to Franklin Community at Epcot.

The Franklin Community Blue Regiment Marching Band stopped at Journey Into Imagination With Figment for a group photo!

At nine o’clock in the evening, the Franklin Community Blue Regiment Marching Band thrilled to “Illuminations,” an amazing nighttime kaleidoscope in the sky, erupting with over 1,100 pyrotechnic bursts. A beautiful Earth Globe floated across World Showcase Lagoon, revealing the wonders of the seven continents on its curved LED screens — the first ever of their kind. Rousing original music complimented lasers turning the very sky into a work of art. After the show, it was back to the coach and onto the hotel for a night’s rest before tomorrow’s adventure.

The next morning, Day Five, the band devoured breakfast at the resort, checked out of its rooms, loaded luggage onto its charter coach, and prepared for departure to Disney’s Hollywood Studios®. Each epic experience here launches students into the action and thrills of movies and television. Disney’s Hollywood Studios® captures the allure and power of Hollywood by giving everyone the chance to be a star. The Blue Regiment learned how movies are made and enjoyed live stage shows based on the animated Disney classics. Once more, a Disney Dining card from Music Travel made lunch and dinner in the park a treat.  At dusk, the band experienced Fantasmic®. The adventure unfolded as everyone’s favorite heroic mouse battled the forces that turned his vibrant dreams into vivid nightmares. Facing off against classic Disney villains in a lavish spectacle of dancing water, dramatic music, breathtaking animation, lasers, fireworks, and surprises, Mickey prevailed! It was the perfect ending to a truly magical trip!

As the band boarded its coach to head home, all looked forward to remembering their experiences and talking about them for years to come! The Franklin Community Blue Regiment marches past Cinderella Castle in the Festival of Fantasy Parade at Walt Disney World!

“Jef, Terry, and the staff of Music Travel Consultants anticipated our every need. Our Disney trip and performance was a wonderful and stress-free experience for the students, parents, and staff. We plan on working with MTC for our next trip.” 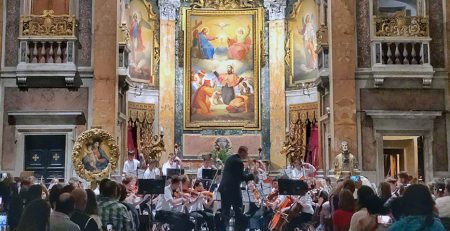 Avon Orchestra's trip to Italy and Austria:  Three once-in-a-lifetime performances in Rome, Florence and Salzburg, plus fun in Siena! Part of... read more